A Leader with a Passion for People. UVS Development Manager, Jonathan Bownes. 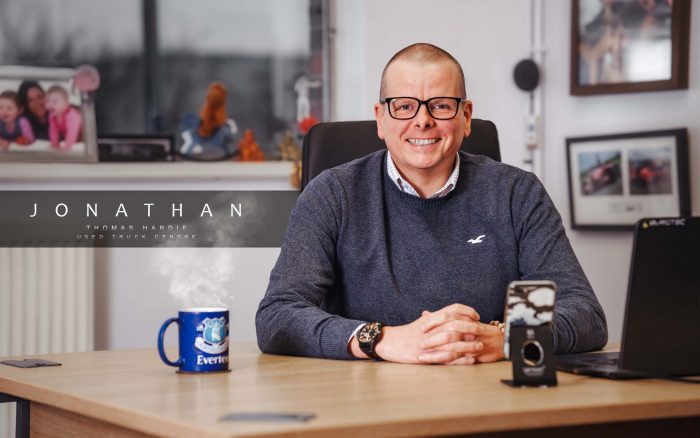 Imagine a ship at sea, a proud and powerful vessel tackling challenging conditions whilst providing a vital service for its crew and customers. Now imagine the captain, a determined individual with the team, objective and destination at the forefront of everything they believe in, Business Development Manager Jonathan Bownes is that captain. But a captain without their crew is destined for failure, and nobody believes this more than Jonathan.

Like many Winsford residents, Jonathan’s story begins at Verdin Highschool. ‘School was fantastic, I had an absolute ball. If there was an option for it to last forty years I’d take it. Work now is very similar to school, but instead of learning Geography and Pythagoras theory, it’s finance deals, buy-backs and everything else that sales incorporates.’ At school, Jonathan didn’t take himself too seriously, often more interested in making others laugh and smile than tectonic plates or equators.

Not wanting to waste any time transitioning into the world of work, by 11.30 am on his last day of school, Jonathan was in the passenger seat of a TVR Griffith 500, hurtling towards his first job as an apprentice mechanic at Christopher Neil TVR & Lotus Specialists. Thanks to a YTS (Youth Training Scheme), Jon worked alongside a team of technicians repairing, maintaining and racing TVR’s and Lotus’s. ‘I learned more in the three years I spent in that garage than anywhere else and drove some fantastic cars too. Lamborghini Countash, Ferrari F40’s and 911 Turbos, but I realized that my wages wouldn’t stretch very far, plus that kind of environment just wasn’t for me.’ Jonathan would eventually extend into the used car trade, buying and selling through the auction to help bulk out his pay packet.

With bigger and better aspirations in mind, Jonathan would repeatedly send his CV to Brunner Mond (ICI), a local chemical and engineering plant. ‘At the time, if you got a job at Brunner Mond, it was a job for life.’
On the third attempt, over eleven hundred people applied with only five securing a place, Jonathan was one of those five. Unfortunately, Jonathan’s time with the plant was cut short, thanks to a routine medical assessment. ‘Turns out I was colour-blind, so working with the kind of equipment and cabling they did on a daily bases meant it just wasn’t to be.’
Following the recent revelation, Jonathan returned to Chris Neil’s, and the spanners, eventually achieving level 4 Motorvehicle Repairs at STS (Specialized Training Solutions) in Sandbach and taking home Apprentice of the Year on two occasions whilst working at Chris Neils.

A job application in the local paper for a Trainee Used Truck Salesman caught Jonathan’s attention. So, one afternoon, following a routine PDI of a V8 Lotus Esprit, Jonathan combined the test drive with a run down to Thomas Hardie’s Used Truck depot in Middlewich. The job application required a written letter, but Jonathan has a history of not always doing things ‘by the book’. ‘I arrived in this brand new V8 Lotus donning a set of bright pink Exclusively 9 Porsche overalls, rigger boots and AC Millan socks. I asked for Graham Smith, the Director at the time, to discuss the job he had available. He appreciated my confidence but insisted I still apply through the appropriate routes.’

Jonathan embarked on a six-month trial before solidifying his position as a Used Truck Salesman. Thanks to his friendly, outgoing personality, it didn’t take Jonathan long to build a strong and loyal customer portfolio of which he still maintains today. ‘The sales job was the best thing to ever happen to me. It suited my character and personality, plus I love people. I am a people person at heart, it’s what I buzz off the most.’ Jonathan would do well as a used truck salesman, visiting numerous countries around the world and supplying the majority of the UK and Ireland with countless quality Volvos. ‘There wasn’t one thing I didn’t like about the job, it had its challenges obviously with the 2008 recession, Foot & Mouth and the introduction of Adblu knocking us back for six. But on the whole, I wouldn’t change any aspect of it.’ To further expand his own knowledge of sales, Jonathan would invest eighteen months into a new vehicles sales position at Thomas Hardie’s Deeside depot, but with the used side increasing in momentum, Jonathan made the decision to focus all his efforts on what he knew best, returning to Middlewich’s used vehicle sector for a further thirteen years.

With UVS progressing faster than anticipated, Chris Schofield, Used Truck Director, and Jonathan together decided that a new strategy would be needed to address the growing demand, alongside a vision to develop the business to coincide with the nature of automotive selling. As a result, in 2015, Jonathan was appointed Business Development Manager and was now responsible for strenghtening the department. The world was shifting online, so UVS needed to adapt. The demand for used trucks was mounting, so an experienced sales team was required to cater for the expansion and a dedicated department responsible for restoring used Volvos back to their former glory was a must.

‘Every aspect of my role will always revolve around the people. Allowing others the chance to introduce new methods and ideas to the business, watching the department grow and learn everyday,  recognising talent early on and encouraging it. It’s a constant drive to enhance the team and the business. It wouldn’t be possible without the trust we’ve gained from the board, allowing me to shape the department into what I believe is right. The business is un-recognizable from how it was five, ten, fifteen years ago, such has been the power of progression and it will always move forward as long as I have a say. Stagnation is my biggest fear, once it sets in, it’s an up-hill struggle to abolish, but with the right people and the right attitude, anything is possible.’

Outside of work, Jonathan conveys his people skills onto the football pitch, with the beautiful game taking up the majority of his time. Jonathan currently plays for Whitegate United and has also managed the Red Lion pub team. Mountain biking, running and ‘very’ amateur boxing also keeps Jonathan out of trouble and in a stable working condition. ‘Everything I do outside of football is to keep me fit for football. It’s everything to me.’ Another guilty pleasure of Jonathans is his 916 Ducati. ‘Apart from when I collected it, it’s never left the garage. It’s truly the most beautiful thing ever built by man’. Despite a beloved bike gathering dust or precious moments on the ball, the family will always come first. With two daughters, the dog and a ‘very’ understanding wife claiming any spare time.

Jonathan’s biggest passion is his people, investing immeasurable amounts of energy and time into their development. Not only to help the department but themselves too.