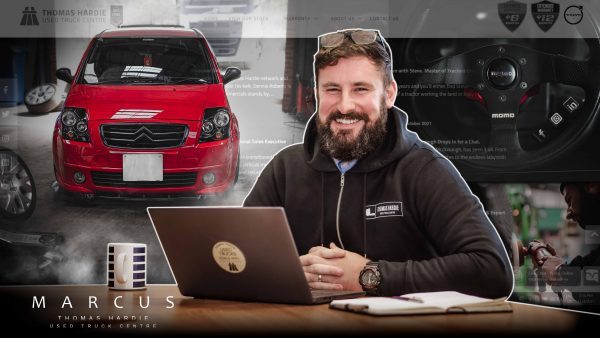 Marcus Harley has always had a passion for taking things apart and putting them back, roughly how they started. From cars to computers, if it un-bolts, it’s fair game.
Now, responsible for many online aspects of the used truck department, Marcus has transitioned from motherboard to keyboard, injectors to Instagram, linkages to Linkedin.

With School out of the way, Marcus enrolled at South Cheshire College and began a three-year Motorvehicle Maintenance course covering basic car repair. ‘I’ve always had an interest in cars, so motor vehicle maintenance was a no-brainer. I met some very funny people along the way and had a great time.’

Realising college wouldn’t pay for fuel, phone bills or the pub, Marcus began searching for work and found a small, independent Land Rover/Range Rover garage not too far from home. Here, Marcus was responsible for servicing, diagnostics and chassis repair/protection via Waxoil application. ‘It was my first job and I quickly realised how out-of-my-depth I was! College doesn’t prepare you for the real world. Dealing with customers, rusty bolts and bosses. But looking back, I learned so much and I now appreciate my bosses efforts so much more than I did at the time!’

After spending roughly three years with the garage, Marcus decided the time was right to move away from Land Rover and over into HGVs, this time specializing in converting tractor units into rigids. Here Marcus dealt with axle shifting, bolt-hole drilling and loom extensions. ‘It was definitely a step-up from what I was used to. Everything was heavier, tighter or more stubborn…and that was just the blokes who worked there!’

When not complaining, Marcus likes to work with his hands even outside of the nine-to-five. And with a 1986 Austin Metro being his first car, this was probably for the best. A huge fan of the modified car scene, even a 998cc Metro wasn’t safe and was the first of many cars to receive the odd fettle. Later moving on to Ford Escorts, Vectras, Subaru Impreza’s and now settling for a Citroen C2 VTS Sebastian Loeb edition, Marcus prefers to add his own personal touch to his cars, for better or worse…
When not ‘tastefully’ modifying cars, Marcus has built and helped build numerous gaming computers from the ground up. Acquiring components and assembling them accordingly, Marcus currently runs a self-built rig of his own. ‘Cars and computers are basically the same now anyway, so they go together roughly the same. My father-in-law introduced me to PC building and he also builds classic Minis, so we do have quite a lot in common and fuel each-others passions.’

An online advertisement for a valeter/labourer role at Thomas Hardie Used Truck caught Marcus’ attention and combined a lot of  interests at the time. Investing over three years in the PDI bay, Marcus developed his truck knowledge further and eventually moved away from the detailing side and more into the maintenance and repair. ‘I was obsessed with keeping my cars clean, so a job cleaning and maintaining trucks sounded great. I progressed on to repairing the trucks towards the end which again suited me fine. I worked alongside a great group of lads who were always up for a laugh but had pride in what they did.’

A Sales Support role became available just as Marcus began feeling it was time to move away from the tools and take on a different challenge. Business Development Manager Jonathan Bownes realised that Marcus could play a fundamental role in developing the online and social side of the business. Tasking Marcus with the development of a new website for the used truck department alongside DMS experts Dragon2000.
Now nearly three years into office life, Marcus maintains the used truck social media and website advertising effort. ‘I for one never thought I’d be a part of the world of marketing, but I love getting our trucks out there amongst the masses. Building a relationship between our online customers and the business is so important in today’s world. Plus it’s a great way of showcasing what we have available and what’s going on here in Middlewich’.

With big plans for the used truck department and its online footprint, Marcus is determined, with help from the wider Thomas Hardie Commercials group, to get quality used trucks out onto the global stage.

Writing about yourself is never easy…