The Man Behind the Lens, John Bogue. Supervisor, Photographer Innovator. 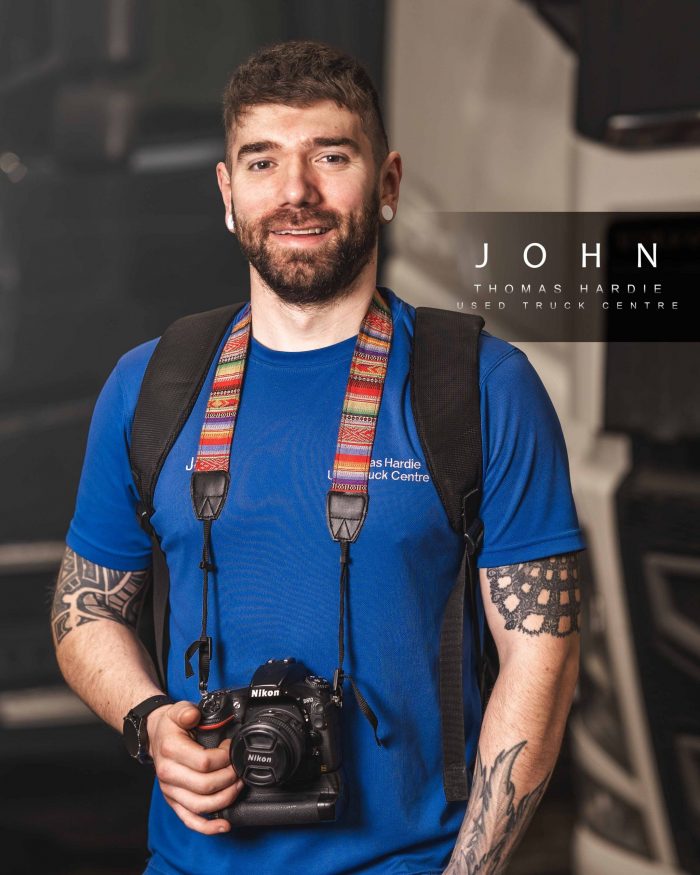 If you follow Thomas Hardie Commercial’s social channels, there’s a good chance you’ve seen some of John Bogue’s craft, with his work previously featuring in Commercial Motor magazine and alongside multiple big-name hauliers throughout the UK. John’s passion and enthusiasm has helped him elevate his position throughout the company. Now, with his efforts engaged in driving the used truck PDI bay further than ever before, let’s dig out the photo album, avoid the awkward baby pictures and together learn a little more about John Bogue.

John later returned to education via a Site Carpentry & Joinery course at Mid-Cheshire College, where he spent three years learning the do’s and don’t of woodwork, achieving a distinction along the way. ‘I’m a big fan of building things with my hands and I like to take my time to get it right. I’m a very meticulous guy and am conscious of the finer details in everything I do.’

With College at an end, John ‘tolerated’ three years at a supermarket warehouse, working up the ladder and eventually achieving Key Operative, responsible for keeping the machines in check. ‘The job was pretty much a stop-gap that went on for longer than it should. I made some good friends, but it wasn’t exactly challenging or exciting.’

Following three difficult years in a job that struggled to test his capabilities, John applied for a vacancy at Fords of Winsford, where he would spend the next seven years. During this time, John would work his way through numerous roles such as valeter, upholstery repairs and wheel refurbishing. ‘I learnt a lot at Fords and made some fantastic friends. My meticulousness’ would get the better of me sometimes, as I would spend longer than others getting certain repairs absolutely perfect. I also missed out on some great opportunities as I struggled with the idea of change, but on the whole, it was a great experience with some awesome people.’

A very similar role as a valeter/labourer became available, just down the road at Thomas Hardie’s Used Truck Centre. With John already well-acquainted with the skills necessary to succeed, it wasn’t long before he began introducing some of his own tips and tricks learned from Fords to the rest of the team. ‘The aspect I enjoy most about the UVS bay is the responsibility you have. You aren’t just a valeter, you are the last stop before the customer collects. It’s your job to make sure that particular truck is perfect in every sense and it’s all down to the people and the team to make that happen.’

Now would be a good time to introduce perhaps John’s biggest passion in life…aside from his family of course.

Roughly seven or eight years ago, a very close friend introduced him to the world of photography. John would spend countless hours at a friend’s canal barge, learning every intricacy there is, from exposure to subject, ISO to lighting. This passion would drift in and out of John’s life, eventually landing front and centre, one late afternoon on the used truck sales pitch. Following a spur-of-the-moment photoshoot of a friends car, John’s talents behind the lens were noticed by multiple members of the used truck team, all with a similar vision for how these skills could benefit the world of haulage.
John would continue to prove himself to be a valuable asset to the business for a further five years. Developing his camera skills and venturing into videography, producing numerous promotional pieces for the wider company.

Today, John holds the position of PDI Supervisor and is responsible for a small, close-knit team.
‘I wanted to challenge myself with something I’ve never done before. I feel my personality has developed off the back of managing my team, plus I care about the final product and how we come across to others. I hold great pride in my squad and enjoy keeping spirits up and offering praise where it’s due.’

‘Photography is a snapshot of time, a glimpse of emotions and feelings at that moment, impossible to reproduce. Phones weren’t what they are today so taking a genuinely good picture was unbelievably satisfying. My work comes from the heart and I try to make every picture count. But I struggle to accept praise for work that I don’t class as difficult. I’m so self-judgemental of my work, I do sometimes miss the early experimental days.’ A lot of my work portrays trucks in a heroic light. Trucks to some are literally just trucks, but to me, they are the lifeblood of the country. Truck and driver working in harmony, pumping life, or goods you could say, around the world.’

One of John’s earliest subjects was Oscar, his Border Collie. Collie’s are the smartest of all dog breeds and Oscar was no exception, with an impressive arsenal of tricks up his…leg? ‘I was proud of what I and Oscar achieved together. We had such a strong connection and it was so rewarding seeing him progress and develop. Unfortunately, I  had to let him go to some good friends of mine as I just didn’t have the space or time to give him the exercise and attention a breed like that needs.’

Believe it or not, John does actually spare some time for other hobbies. Drawing, the gym and martial arts are a few more activities that help keep John out of trouble and on the straight and narrow. ‘I started out with Wing Chun and later moved onto Muay Tai boxing. I love pushing the boundaries of what the body can do.’

‘Drawing is an expression of you at that moment. It’s an articulation of your feelings and thoughts and it help’s me relax, music also plays a big part.’

A passionate and dedicated member of the used truck team, John offers a skill set not found anywhere else in the used truck world. Committed to pushing and improving the PDI department, whilst providing a unique perspective on automotive media and capturing some of the business’s most memorable moments.