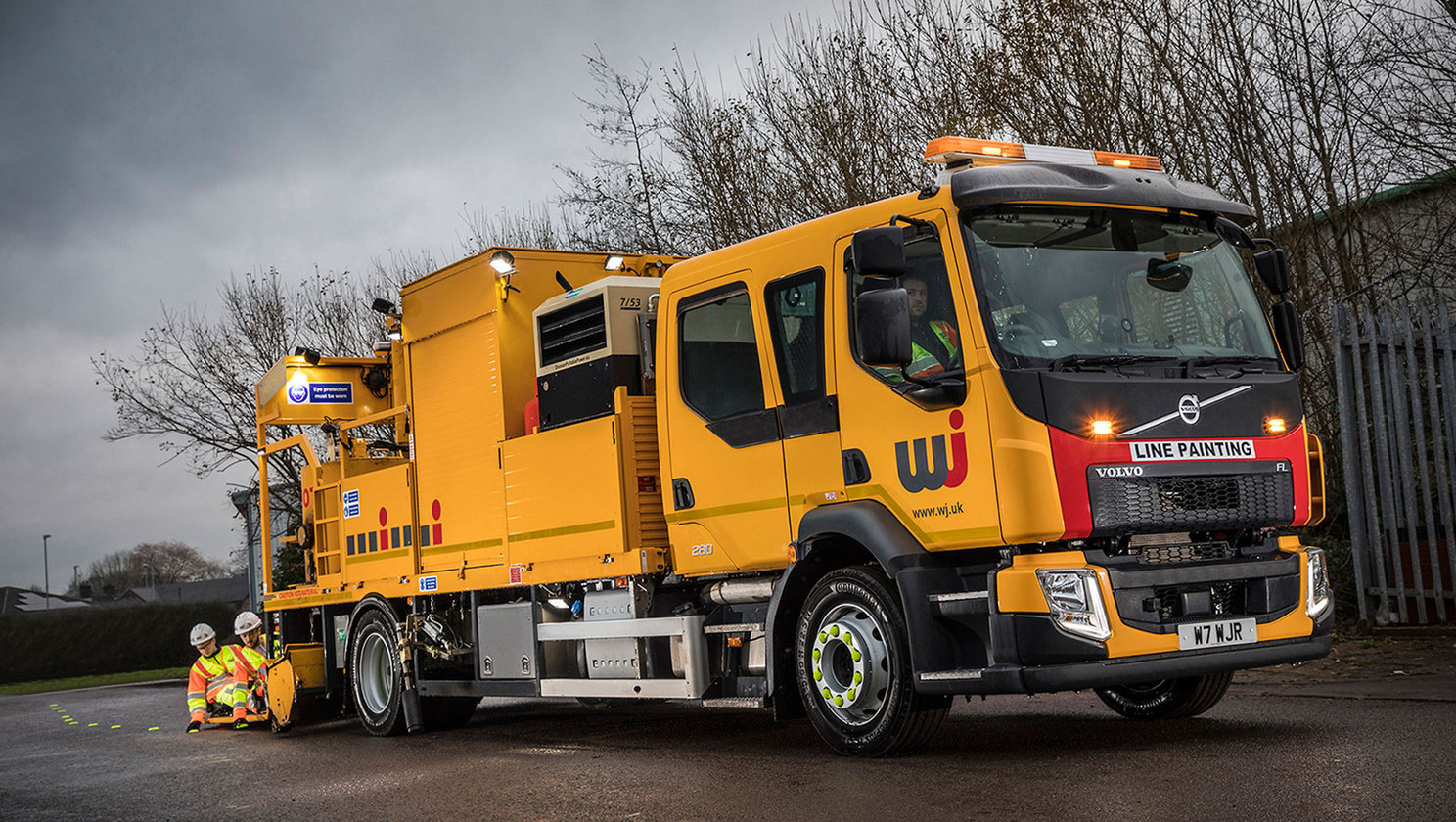 “Volvo has a long standing presence in our fleet of 150 trucks and the latest FL rigid was ordered after the performance levels of a 16-tonne FL Crew Cab,” notes Mark Fawcett, Managing Director at WJ’s Elland depot. The FL has been allocated onto temporary road marking works and is fitted with specialist bodywork that is designed and built in-house by WJ UK.

Mark explains how the vehicle works. “The truck has a team of four. The driver follows a pointer bar to guide him accurately on the carriageway and up front in the bodywork, a hot compressor air dries the road surface. Behind that is a canopy covered stockpile of temporary coloured road studs. Immediately aft of the rear axle is a radar encoded bitumen glue applicator.”

He adds, “This triggers the correct amount of surface adhesive every one to two metres, depending on the job in question. Finally, on the rear platform, two team members and their stock of markers, stick the studs onto the roadway.” WJ are currently working on a robotic arm design to automate the latter function.

The inaugural FL 18-tonne Crew Cab starred at the Road Safety Marking Association Show in Nottingham before entering service last December. “The new FL is an excellent machine. The driver and team allocated to the truck are pleased with both its performance and capabilities,” concludes Mark.

Notes for Editors :
• WJ was formed by Wayne Johnston and Martin Webb in 1987, where they both undertook road markings for large national road marking and traffic management companies.
• In 2004 WJ acquired Moxon Road Markings Ltd and Linkline Maintenance Ltd and Ambridge Thermoplastics in 2007, when permanent road markings became a major part of the WJ Roadmarkings portfolio.
• In 2012 WJ, recognising the need for an enhanced training provision, established a Driver Training Academy out of their Stoke depot.
• Today WJ UK provides a nationwide service via a network of depots and is the UK’s leading independent specialist road marking business dedicated to permanent or temporary road markings and road studs.